What Will You Feed?

I remember when I was pregnant for the first time all I seemed to see were pregnant women. I started to believe that there was an epidemic of pregnancies. Then I got a little yellow VW bug and I began to see VWs everywhere. Now I understand that I was seeing this because I had been sensitized to it and noticed it now where before I had ignored it. It was my attention to those two things that caused me to see what had always been there in front of me; I simply hadn’t been paying attention. That’s what happened with cancer. Suddenly all I seemed to hear about were people who had been diagnosed, stories in the news, famous people dying. Attention is just about everything as far as your mental state goes. What you are thinking about is what you see. When I realized this, I turned my attention to what I loved instead of what I feared. I wasn’t telling myself to ignore reality. But a sunrise is a real as a garbage dump. The ugly and the beautiful exist side by side. I tried to keep my attention turned to what I wanted, rather than what I didn’t want. That way, my mood stayed somewhat even and I had more energy and patience to get through the difficult moments. And, of course, there is always that magic synergy that we can’t measure but know through various studies and deep in our heart, that keeping a positive attitude helps healing.

It is my choice where I place my attention. This is just another habit to learn, to keep my thoughts on the track I want. A friend recently emailed me about learning to ride a bike. One day he saw a snake in the road and he tried to avoid it. But he ran right over it. Why? Because he was focusing on the snake. As an adult, now he knows to focus on where he wants to go, not on the snake. It just reminded me to keep my mind focused on what I want to happen, not what I don’t want to happen. I have always tended to see the negative side of things first. I thought I did this because I was trying to prevent anything bad happening. Or maybe I did it so I wouldn’t be disappointed if what I wanted turned out badly. Whatever the reason, this illness taught me to turn my mind in a positive direction. There is a wonderful teaching story about this. It’s been attributed to many different Native American traditions. I suspect this story exists though in some form in all cultures, because what it says is a basic truth. 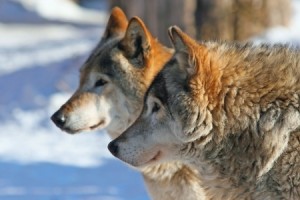 Grandfather was talking to his Grandson. His Grandson had been in a tussle with a friend and was feeling angry and hurt, blaming his friend and then sad because his friend was angry with him. So the old man said, “You know Grandson, a fight is going on inside me too. It is between two wolves. One is angry, fearful, envious, jealous, greedy, arrogant, hard hearted, full of resentment and self-pity. He always lashes out at others, he is full of fire. The other is full of joy, forgiveness, love, peace, serenity, compassion, humility. He meets people with empathy and kindness. He is full of the gentleness of a summer breeze.

It is a truly a terrible battle going on inside me.”

And Grandfather replied, “The one I feed.”