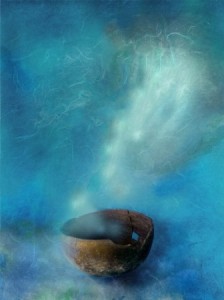 It’s good to know that intuition is muffled when approached from the desparate mind but welcomed by a calm heart that listens in stillness. Doc Childre, The Heart Math Institute

I believe my intuition was vital to get through this journey of illness. Intuition is the immediate hit you get that something is right or something is wrong. It seems to bypass rational thought. It certainly is much faster than rational thought(1). I suspect it is part and parcel of our human inheritance and I think at least part of it taps into the deep unconscious, the collective unconscious that Jung described, the great base of life that this whole world shares. However, we live and have lived in a world of severely rational benchmarks for some time now, where nothing that cannot be proved, tested or felt is considered real. So most of us have grown up and lived our lives either dismissing this part of us as irrational or hiding our intuition for fear of ridicule. It used to be, in the world before the scientific revolution, people who approached things in an  experimental manner – like herbalists – were often accused of being witches and drowned in the local pond. Now, it’s people who use the intuitive parts of their mind who are hooted down and drowned in the distain of scientific opinion.  Ironic, isn’t it?

The only really valuable thing is intuition.  Albert Einstein

I’ve always counted on my intuition, but quietly so I wouldn’t be ridiculed. When I was leaving the office of my surgeon, who had just laid out all my rather bleak options of living with a Whipple for the rest of my (probably short) life, I heard the little voice in my head say “but what if you live?” “What if you live.” I thought whoa, what was that? It seemed crazy, and went against all proof and statistics. I shook my head. I thought well that’s just stupid, everyone knows you can’t survive this. But that phrase stayed with me and, though there were lots of reasons why I decided against surgery, that little whisper in my mind was part of the decision-making process. And now, looking back 5 years, though it would appear at the time that I made a wrongheaded decision, an irrational decision, here I am. Still alive. I’m thanking, in part, my intuition.

If you have naturally used your intuition, I’d suggest you pay attention to it now. Certainly, think things through. But right now it can be hard to figure out what your next step should be and your intuition may give you some help, some insight.  If you are a rationalist, then you are still going to use that mind to make your decisions, and I wouldn’t tell you not to. But if you’ve always had some strong intuition going on for you, I would at least give it a listen.

If you feel you need a little bit more than just my story, I would suggest you watch this and become familiar with the Heart Math website. They have wonderful tools to help you hone, among other things, your intuition.

The Heart Math Institute is an amazing place. Well, if you go there, you’ll see. They have published some in depth intuition studies on their website. This is really good information on intuition: