And so – I found Spirit in the silence, I just let myself rest in silence. 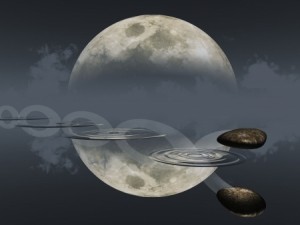 Meditation can be just that: being simply quiet and allowing silence to fill you. Those of you who have meditated know that it isn’t always that easy, that the mind continually chatters at you. I think I read that every 7 seconds a new thought will pop into your mind, completely unconnected with the previous thought. It’s an interesting exercise just to sit there and watch your thoughts fly back and forth. It seems, after 15 minutes or so of that, that it is really a jumble of thoughts in your head that is leading your life for you – like living in an old attic filled with a couple of generations of household crap. I knew that crap was the last thing I needed. Meditation was a haven in my life, a dark, silent cave I could visit to shut out all the noise of the medical establishment, all the turmoil, all the fear, all the stories and just for a while, exist in timelessness and quiet. 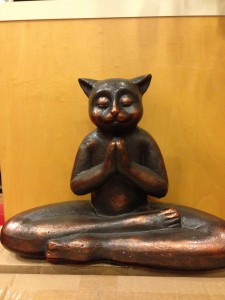 I’m not a champion meditator. At different times in my life, I have had a regular practice, but it comes and goes. Even so, I have found meditation very helpful during these difficult times. But you don’t have to do it perfectly. You don’t have to sit in the lotus position. You don’t have to believe in any religion. All you really need to do is get comfortable (lying down is fine, but I usually fall asleep) and relax. There’s a lot of help out there. I often found that listening to guided meditations was the way to go because sometimes I had trouble keeping the noise in my head at bay. I started with the practice of mindfulness. It’s the most studied and medically accepted style of meditation because the evidence of its benefit to patients is firmly understood.

There are many other styles of meditation, each fashioned to produce different results. The other technique I want to mention – one that I have found made profound changes in my life – is called Tonglen Meditation. Tonglen is focused on breathing in the pain of others and breathing out happiness to them (I’m simplifying). Stephen Levine, who has been helping people die a good death for a very long time, recounted this story in one of his books.

There was this woman in a hospital, dying of cancer that had metastasized and was causing her enormous pain. Unfortunately for her and those around her, she was nasty, bitter, abusive. Her children wouldn’t visit her because of her ugliness to them, she seemed to have no friends, even the nurses tried to avoid her calls. She wouldn’t let Mr. Levine help her in any way. So she lay in her hospital bed, the pain in her back huge and hard to control. One night she simply couldn’t fight it anymore and she simply surrendered to the pain. She said that all night she flew around the world in a dream state. She saw a woman in an African hut dying in childbirth with horrible back pain. She saw a woman in China crushed in an mudslide, dying with unbearable back pain. That whole night she traveled the world in this way, seeing all the people in pain, all the people dying. The next morning, she was a different person. She became kind to others, she was pleasant to be around; eventually people noticed and her children came to visit. The nurses were happy to drop by her room. Stephen Levine asked her why, what happened? She said that she realized the pain she was feeling wasn’t her pain, it was just THE pain. Everyone had it to one degree or another. And this fellow-feeling she had experienced transformed her viewpoint and her life. She eventually died in peace with people around her who loved her, who wanted to be near her.

This story is an example of what I believe Tonglen meditation is all about. I find it an extraordinary way to feel connected, to free the heart, to know you’re not alone, to know that you have something you can give back. Sometimes I felt too weak to take in other being’s pain and so I wouldn’t do it for that day, or that week. I’d do something else until I felt ready again to do Tonglen (see the metta prayer below). I learned this by listening to CDs, mostly just following them in the beginning. Still sometimes, it’s hard for me to breathe in other people’s sorrows but I know it’s worth the effort. It brings me enormous peace and I hope in some way that it eases the world’s burden just a little. During my times of pain or low energy when I can’t do Tonglen, I say a metta prayer over and over. Here’s what I say:

May all beings be peaceful

May all beings be happy

May all beings be safe

May all beings awaken to the light of their true nature

May all beings be free

To find a list of the meditation CDs that I used, see Resources.