There is a saying, an old saying, which I have heard medical people use: desperate times call for desperate measures. I take this to mean that when the situation is critical and there aren’t any good treatments available, it’s time to try anything. Do you remember Aron Ralston? He was the hiker who was stuck by a falling boulder, trapped in a canyon and finally cut his own arm off to save himself. That’s a desperate time and that’s a desperate measure.  That’s what a lot of us who have a terminal illness often face. For pancreatic cancer – at least in November of 2013 – there are not really good measures for healing. Of all cancers in the US, it is the 4th most lethal.

If you read Out of Africa or saw the movie, you will know that the main character was infected with syphilis by her husband. This was years before antibiotics, and syphilis eventually killed and disabled the person, so desperate measures were it. The cure that Isak Dinesen used was the mercury cure. I’m sure you’ve heard of mercury, a silvery metal that used to be used in thermometers.

“A patient undergoing the treatment was secluded in a hot, stuffy room, and rubbed vigorously with the mercury ointment several times a day.  The massaging was done near a hot fire, which the sufferer was then left next to in order to sweat.  This process went on for a week to a month or more, and would later be repeated if the disease persisted.  Other toxic substances, such as vitriol and arsenic, were also employed, but their curative effects were equally in doubt.” Mercury had terrible side effects causing nerve pain, kidney failure, and severe mouth ulcers and loss of teeth, and many patients died of mercurial poisoning rather than from the disease itself.  Treatment would typically go on for years.” (excerpted from an article in The Journal of Military and Veterans Health: http://jmvh.org/article/syphilis-its-early-history-and-treatment-until-penicillin-and-the-debate-on-its-origins/)

Sounds like chemo to me, though I’ve never had chemo, just watched friends go through it. It’s how I look at current pancreatic cancer treatment. Science still doesn’t have a good handle on how to treat it, so they do whatever they can think of to halt the progress of the disease; they’re trying hard but there’s still no reasonable expectation of cure, as there is with breast cancer. The pancreatic cancer cell is a really tough customer. Treatment seems to me a hail Mary pass, just the best that’s available in a field of terrible options. It’s a huge part of the reason I didn’t chose treatment. Still, I understand that sometimes we take the smallest, most painful chance because what else is there, really? These decisions are very hard to make; sometimes anything is preferable to looking at 3 months left, 6 months left. I remember sitting there in the surgeon’s office, asking that question: how long have I got? Three months Doc? I remember the relief when he said, oh no, probably a year. A year seemed like an entire lifetime to me in that moment. I think it was that exact moment when the I realized I might forego treatment. I had a year. A whole year. I felt like a bird let out of a cage. Could I fly free in that year? I’ve talked about this in detail in How I Made My Decision/First Steps. I know what I really didn’t want to be was desperate. 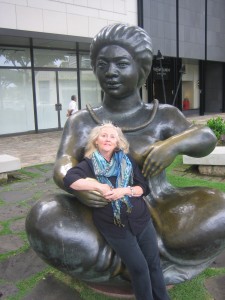 Falling into arms of kindness

I hate change. I don’t duck it because how can you, there’s nothing more inevitable than change. But that doesn’t make me like it. I thought at the time I was being a weenie, that I should toughen up and bite the bullet. Then I watched my cat spring a foot into the air when she saw a new plant I’d placed by the door. Made me think back to horses and how berserk they get when something blows by their head. Every living being hates change I think. Looking back, my decision to forego treatment might have been rooted in just this simple a thing: a dislike of change. I know this probably isn’t the most noble reason, I know it isn’t the “suck it up and pull up your panties” attitude that sometimes we need to have. It’s just that the final decision on your life might need to include kindness towards yourself, finding what you’re comfortable with and going from there. I know I am lucky. What I don’t know is what being kind to myself meant for my healing. I think it meant a lot.