How I Made My Decision

As I write this in May of 2013, I have lived more than 5 years since CT scans discovered a problem with my pancreas. That’s four more years than I was given by the doctors. My cancer was 2 cm., just at the point of being resectable – meaning they could operate on me, it was small enough. That put me in with a lucky few whose cancer was found when it was small. I had about two weeks before I was scheduled to see a surgeon, so I started doing my homework. The only place I really had to look was the internet and I found very little that gave me anything but a death sentence (Randy Pausch’s blog gave me all sorts of help, but in an odd way. More about that later). So I fell back on techniques I had learned over years of study; I will explain those in Techniques. But for now I’ll tell you that my first step was probably the hardest. I had to decide “what do I want, really?” It never gets more real than this, that time when you know your decision will mean either life or death. Time stands still.

So, what are the options? I don’t want cancer, I want to live, I want to see what the future holds. Seems like a crazy question perhaps.  Isn’t “to live” the only answer there is? Well, yes and no. That was my original “want” and I’m not even sure it was that. I was just gibbering and crazy, I don’t think I had even thought that far. Fear can put us in a very strange country with no landmarks that we recognize and we stumble around, trying to find something solid we know, trying to find something that looks like normalcy. So it was very important for me to get somewhere quiet, take a few deep breaths and decide what it is, from this point on, that I really wanted. I’ve got a cancer diagnosis. OK, so the choice isn’t “no cancer.” I know some people will go there, believing in positive thinking. That sounded good but wasn’t realistic for me or the way I think. Since pancreatic cancer is extremely hard to cure, I was also pretty sure that I was going to die.

How is this decision to be made? I had a great surgeon (I talk about this in this section, The Whipple). He went over what my one chance at a cure would be like. And I’m sure he wanted to cure my cancer. When you go to a doctor, I’m hoping that’s his focus. He doesn’t want to see you die and so all his recommendations will be focused on that, or on treatment to support your life. He’s gone to school for 20 years, probably has a huge debt, many sleepless nights studying, years of scut work and now he’s looking at you, telling you what he knows to be true and what he wants for you. I’m not knocking that, I’m very appreciative of it in fact. But bottom line, it’s his vision for you. I had to decide clearly what I wanted. It’s my life, my spirit, my mind, my emotions, my family, my history, my body, my pain, my destiny. My choice and my death.

So let’s go back to Dr. Randy Pausch. He was an MIT professor who wrote “The Last Lecture” after his pancreatic cancer diagnosis, appeared on Oprah, became famous for the beauty of his advice that he passed on in his book. He had a small lesion, 3mm when diagnosed, and dedicated himself to treatment. As I read his chronological story (see Resources for the blog address) I realized how little his path appealed to me, how little it fit me. Scans, treatments, waiting for results, pain and sickness, experimental treatments, waiting for the results, at the doctors or the hospital or the clinic. More treatments, more disappointment. If I had two small children and a young spouse as he did, I might have made a different decision. I take off my hat to all those people who sacrifice their bodies in the hope that they can sustain their families. I’m very glad that I didn’t have to make that choice.

I owe a deep debt of gratitude to him. His journey mapped out for me the best that I could hope for. He had cutting edge, state of the art treatment, probably better than anything I could afford or was covered for. It became crystal clear to me that I did not want to spend my remaining days always at the doctor or in the hospital, always waiting by the phone for the results, feeling that tightening of the gut, waiting for the next ax to fall. I wanted peace, joy, freedom, fresh air, calm. 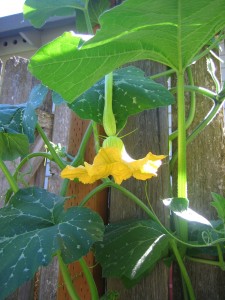 In the end, it really wasn’t that much of a choice. It was so obvious to me that I wanted the everyday things I cherish – going to the movies, eating out, walking the beach with my husband, watching the clouds in the sky, breathing morning air, seeing my garden bloom. I wanted that instead of a life lived in hospitals and doctor’s offices, always being slightly sick, waiting for results on pins and needles, seeing in the faces of my friends sadness and concern instead of our usual fun. If I had gotten breast cancer say, and there was a great expectation of living well for a long time, I probably would have chosen treatment, trading discomfort and pain now for something better in the future. But that wasn’t the future promised to me with this diagnosis. To me the quality of my life for one year was worth giving up a quantity of years that I thought I would live largely in pain and sickness So I chose not to have the Whipple or any other medical treatment. I simply decided that what I valued most in my life would be too compromised by having the surgery. I chose what medicine calls quality of life.

There is nothing easy about making this decision. I spent a lot of time on it. I cried, I asked for help, I prayed, meditated and read. I fell apart (in private of course. I was too proud to do it in front of others. Silly. Pride shouldn’t have a place in this decision). I wrote down the positives on one side of a sheet of paper, the negatives on the other. I tapped into chat rooms and different threads, listening to people who were grappling with the same thing I was, either as patient or loved one. It’s difficult, but I’m sure you already know that. Bottom line, there are few choices here. Yes or no, live or die; this is the place you can’t run from.

If you are facing the same situation, I wish you well, from the bottom of my heart. What I did worked for me, but why, I don’t know and neither does anyone else. Maybe it’s just a fluke, maybe I did something right, maybe it’s a miracle. What I do know is that my choice, as my oncologist said, was the right one for me. But let me warn you, my path is probably not your path; the only possible cure currently known is the Whipple operation and I’m certainly not trying to talk you out of it; I chose the way I did because I accepted that I was going to die – and soon. I was just trying to make the life I had left better and richer. Getting well as I did is like winning the lottery – someone will eventually, but there’s no way to know who and no way we know of to change the odds.

All I can tell you is what I did: tried to balance my heart, mind and intuition so I could make the right decisions, embraced the present moment, found some joy, learned a lot, asked for help, realized that nothing is guaranteed in life, not even life.

Just read A Life Worth Living by Dr. Robert Martensen. His book is the best I’ve read so far on the mindset that is most helpful when making decisions like this, especially the last chapters. If you’re still trying to decide your path, I would recommend reading it.