I found that I needed to walk a lot during that first year. Awhile ago, a friend’s husband unexpectedly died and I remember her walking, walking, walking. She couldn’t be still, her grief was so deep. I found that I understood her, now that I was standing in similar shoes. It’s hard to be still; I would pace around the house at times, not going anywhere, just pacing like a caged animal would. Probably for the same reasons: fear, anger, the need to escape and that restless energy that really needs to run (most likely from the adrenals pumping cortisol into the body, the fight or flight response). So I walked. Boy did I walk. I came to know neighborhoods and their dogs intimately. I am deeply fortunate to 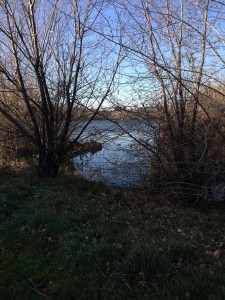 have a natural pond near me, rescued from an old gravel pit operation. It is now home to all kinds of critters, from ducks and geese, otters and muskrats, hawks, ospreys and the occasional eagle. In the spring, I’d hear the red-winged blackbirds calling for a mate, the pigeons cooing, the coots cooting, the scree of the hawk. I’d see baby ducks following their mother, snakes crawling out of the bushes to laze in the sun, bunnies early in the morning.

Fall would bring its intense colors and winter, cold and 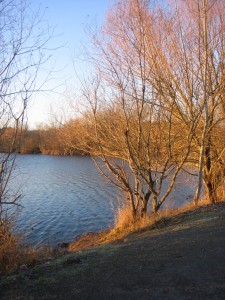 windy, still had its remarkable, stark beauty. It served as the altar of my love for this beautiful world; it worked it’s magic on me.

So walking fast, breathing deeply of the fresh air, being outside, saying good morning to the animals and the people, all helped my mental state immensely. I’m sure there are studies out there that prove exercise during difficult times like these is good for your health. But I didn’t need a study to convince me. I just felt better. Sometimes I would have no energy; for those times, I’d just stroll, maybe once around and then stop. Other times my energy was higher and I could speed walk around three times. My walking style and speed was definitely related to how well I felt. But even during the times when I felt pretty darn bad, I’d still try to walk. It was like a lifeline to me.

I didn’t really do much else but walk. I’ve had friends who got into yoga big time during their illness, friends who took Tai Chi or Qigong, friends who even took up running. Some took up knitting, one took up weaving. I suspect anything that just keeps the mind and the body moving is better than just sitting.