I always think of prayer as talking to God and meditation as listening. My experience is that sitting in silence is more productive than praying. That said, you can be sure that I was praying after the diagnosis. Please let this pancreatic cancer cup pass. After Jesus said the original of that, he then said but your will be done, not mine. That’s pretty much the place I ended up; my life was on the line as I had never felt before and it became obvious to me that the outcome was pretty much out of my everyday hands. The ways I work in this world were not going to cure me. I also doubted that the medical establishment would cure me – the statistics were gloomy. 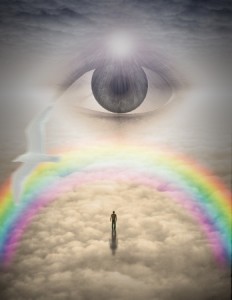 So I gave myself over to Spirit and asked for whatever grace was available. Doing that lifted a great deal of the fear from me. Just recently saw the movie “Gravity” and was really struck by Sandra Bullock’s progression: absolute panic, then grabbing onto anything that would save her, then managing her breath and getting some control of herself back, then struggling to stay alive, then the realization that she was going to die, then the acceptance of death itself. That was pretty much what happened to me, my process too. Grace, in the form of George Clooney (works for me), enabled her to figure out what she needed to do and how to do it to live. I wonder if that was what happened to me? I’m saying at this point, yeah, grace is the reason I’m still here. There was lots of other stuff of course – energy work, diet and environmental changes, changes in my spiritual life, my emotional life. But I think grace is really the foundation for it all. A friend recently told me a story about a woman who got up in his church, announced that she had been diagnosed with cancer, said that she wouldn’t use anything but God to heal her. She died within the year. My take on this is that you can’t demand grace, you can’t assume grace. It comes or it doesn’t come. Or rather, it’s always there but its outcome is not necessarily the outcome you might want. I lived, she didn’t and why that is, I haven’t a clue. I don’t think it’s about being a good person or a bad person. Plenty of bad people do just fine. In fact, the good die young is too often true. I love this particular quote by Tullian Tchividjian: (you can see the entirety of what he says at http://thegospelcoalition.org/blogs/tullian/2013/07/16/what-is-grace-2/)

Grace is a divine vulgarity that stands caution on its head. It refuses to play it safe and lay it up. Grace is recklessly generous, uncomfortably promiscuous. It doesn’t use sticks, carrots, or time cards. It doesn’t keep score. As Robert Capon puts it, “Grace works without requiring anything on our part. It’s not expensive. It’s not even cheap. It’s free.” It refuses to be controlled by our innate sense of fairness, reciprocity, and evenhandedness. It defies logic. It has nothing to do with earning, merit, or deservedness. It is opposed to what is owed. It doesn’t expect a return on investments. It is a liberating contradiction between what we deserve and what we get. Grace is unconditional acceptance given to an undeserving person by an unobligated giver.

It is one-way love.

Mostly, I find my most effective prayers are simple thanks for the life I’ve had and will have. The beauty of prayer to me is that you can do it anywhere you are, anytime. Thirty second prayers seem just fine to me. Prayer before going into chemo, in the car on the way, waiting in line at the bank. Sending up a little prayer, for myself, for others, for the world. That bit of connection to a higher place – just in itself – raises me up, calms me down and eases my anxiety.

If the only prayer you ever say in your entire life is thank you, it will be enough……Meister Eckhart

Then there is intention. The two are not the same but share a common path towards connection with something beyond ourselves and can be used by people who shy away from religion or the spiritual.

Setting an intention – in other words deciding with great clarity exactly what you want to happen – brings me into stillness, and that was a good place for me to be during those first few weeks. Sometimes that time of concentration was my prayer. I would feel the deepening of clarity around me and then could write down what I needed, what I wanted (I explain this in more depth in Techniques/Scripting). I think a firm intention is probably one of the most powerful techniques to use to map out a road ahead as you wish it to be. I never asked to be healed or whole; I had the intuition that that would be the wrong thing to ask. It tended to bring up my fear of NOT getting well, rather than GETTING well. It also reinforced the illness in my mind. So I kept my intentions more around becoming closer to Spirit, enjoying my life and using the time I had left to make some sense of what was happening that might help others. And all that I intended did happen, so from my point of view, intention setting is pretty powerful.  This video gives a much better explanation. I find the stuff surrounding Dr. Chopra somewhat irritating, but hang in there, it’s brief.

One of things that helped me enormously with my intention was taking a moment before I ate, started to drive to a medical appointment, before taking medication, before sitting down at the computer to find more information on cancer – before any of that, before anything I did, asking the Sacred to come in. Stopping that forward motion for a moment, taking a deep breath and being thankful – even if was only to my lucky stars – that I have this moment. Blessing that moment as being all I need right now for my perfect health and healing, and blessing the next and the next – the attitude of gratitude. Making the moment holy. And the next moment and the moment after. By the end of a day like that, my head hits the pillow at night and I realize my whole day I’ve been holding hands with Spirit.